Please make an appointment before coming

The building is eleven-stories high. Walk on the left side of the clothes shop.
There is a push-button system at the entrance (on the first floor).
Please push #405. 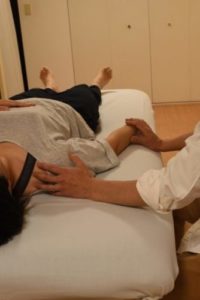 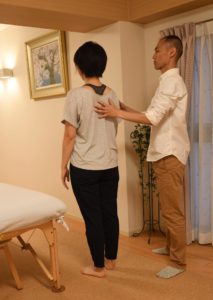 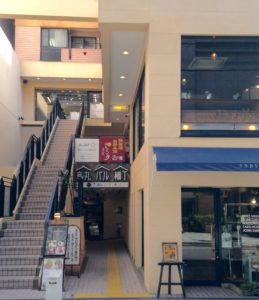 Trial session (explanation and some work)
1 session (about 60min) 3,000yen

Anything is O.K. if you feel comfrtable.

Practitioner Hidehiko Shinobi (Certified Rolfer) Born in 1973.
Graduated from Ritsumeikan University in International Relations. Traveled extensively in Asia and Europe for a year. Bodyworker (seitai) for four and a half years in Nagano. Studied Rolfing Structural Integration at The Rolf Institute in Boulder, Colorado-U.S.A. Certified Rolfer in 2004.

A family of four (wife and two kids)

I had had some Rolfing work done in America before coming to Japan, and, thinking back, the positive effects then helped me confidence (physical and mental) to embark on the adventure of coming here for study, and eventual work.. But that was almost 28 years ago. I began to feel that the stress of working here was starting to take a cumulative toll, as my body became more and more cramped. I seemed to be fighting my own body to move, sit, walk or stand, an additional drain of energy that increased the ill effects of other stress.

I was very happy to find that Shinobi-san was doinfg Rolfing in Kyoto. I had hoped for several years to go through the process again. I felt that I needed renewal that might reach deeper than exercise, diet, sleep or a change of work environment. Happily, Shinobi-san was willing to let me start the sessions again.

Thinking back to the sensations of Rolfing, almost 28 years ago, I looked forward (after hearing about Rolfing from friends who had completed the sessions) to gradually experiencing a “renewed” positive physical awareness and ease in my body, through a series of work sessions devided quite distinctly to deal with various areas. 28 years ago Rolfing also had a very positive image, yet embarking on the sessions one also expected discomfort during deeper work. Still, friends had said then that it was worth it (and indeed, it was!); and any discomfort was just momentary, as the Rolfer`s hands were always moving, slowly, and I found that if I concentrated on breathing the sensations were actually enlivening. And after every session then I felt as if my body was renewed in terms of ease of movement and possibility of movement.

With Shinobi-san I found that positive benefit again, yet I also realized that Rolfing had changed considerably in the intervening time. Although every Rolfer`s technique might be different, and every person`s experience different, I felt that even the deeper work brought not discomfort but instead a kind of awareness that Shinobi-san was “working” on an area that was conflicted. Yet the release of deeper sessions, and overall positive effects, were just as dramatic as previously, if not more so.

From the first session I felt myself naturally looking up toward the sky again.In kyoto I walk a lot, and with each session walking became easier, instead of forced. Breathing became fuller, easier, more natural. Some of the changes with each session were major, others very subtle. There were new experiences, especially around the inner edges of the pelvis and rib cage. Without Rolfing I would not have had a chance to be aware of these areas.

I felt that although previously the “10 sessions” were prettymuch decided, Shinobi-san was instead following an overall guideline in the 10 sessions, yet continually adjusting the sessions to go with what my body needed (in my case, a scoliosis of the back which probably cannot be corrected, but is much, much better after completing the sessions.) Shinobi-san always explained in advance what each session would cover generally, and where he would work in the next movement.

Previously, when the 10 session were done, that was it! One was not supposed to go back for additional work. Now, however, post-10 sessions are possible. For someone like me planning to stay in Kyoto, that is indeed a plus for the future.
Shinobi-san is very sensitive to one`s comfort during each session, and whether there is any physical discomfort as he works. His technique of working is very sensitive, and it might be just my own imagination, but there seems to be a wonderful rhythm in each session, of beginnig relaxations, of opening, of deeper work, and subtle movements.

In my case, with extra work on my back, at my request, there were extrasessions as we moved toward the “10th” session. I look forward to continuing with Shinobi-san for post-10 sessions. One`s own body also deserves after-care!

I think that good teachers are very important in one`s life. Where one finds a good teacher really has little to do with one`s nationality, or where one lives. Perhaps much is by chance, or luck, or just movements that bring beings together at a place and time. I feel very fortunate to have found a fine teacher in many respects, in Shinobi-san.